It has been over a year and a half since my bachloership tire wall had been pushed in by a backhoe that I had hired to berm the building. Since then I have had time to rethink a lot of aspects of my build. First off, hire an actual backhoe driver….. not a guy with a backhoe. Second, don’t tell people when you expect to finish the build, because as an owner builder time frames shift and move constantly. Many variables cause this such as weather, budget, my motivation that day, and other uncontrollable circumstances. Third…… DON’T EVER GIVE UP! 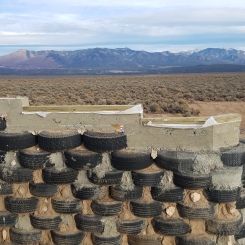 Myself and a team of friends accomplished the concrete bond beam pour on December 3rd, 2017. With my neighbors Jake and Mackenzie (Thank you so much for your help neighbors!) pitching in to build the form work, we were set to pour. I had over invited friends to help, knowing that most wouldn’t be able to attend. Thankfully seven of my good friends showed up and within 3 hours the concrete was in the formwork. After that, I set the “J” bolts into the still wet concrete bond beam. The “J” bolts are just that, bolts that look like the letter “J” with the exposed end threaded. With the exposed threads sticking out of the bond beam I can now attach the plating to the bond beam. The rafters for my roof will set on the plating attached to the bond beam.